What Is the Relative Strength Index (RSI)?

The relative strength index (RSI) is a technical analysis indicator used by traders to measure the current market momentum. The RSI indicator is an indicator introduced by J. Welles Wilder Jr., alongside other famous indicators in his 1978 book, "New Concepts in Technical Trading Systems." RSI tries to depict the magnitude of recent price changes and evaluate the current and historical strength of an instrument. Relative Strength Index highlights overbought or oversold conditions for the relevant instrument. The RSI indicator is an oscillating indicator with values ranging from 0 to 100, and it can be used for predicting trend reversals as well as for existing trend confirmation. A typical reading of the RSI is: values above 70 indicate an overbought area and values below 30 - an oversold one.

Calculation of the Relative Strength Index

Below we present the formulas used to calculate the RSI indicator values. Relative Strength Index is calculated in two steps. The first step involves the calculation of the following formula

The average gain and average loss are calculated as follows

For up periods (close being higher than the previous close)

For down periods (close being lower than the previous close)

The final outcome of the Relative Strength Index calculation is a value between 0 to 100, which is usually plotted on a chart below the main price chart. We can see an example of a plotted RSI indicator from Fondex cTrader below. 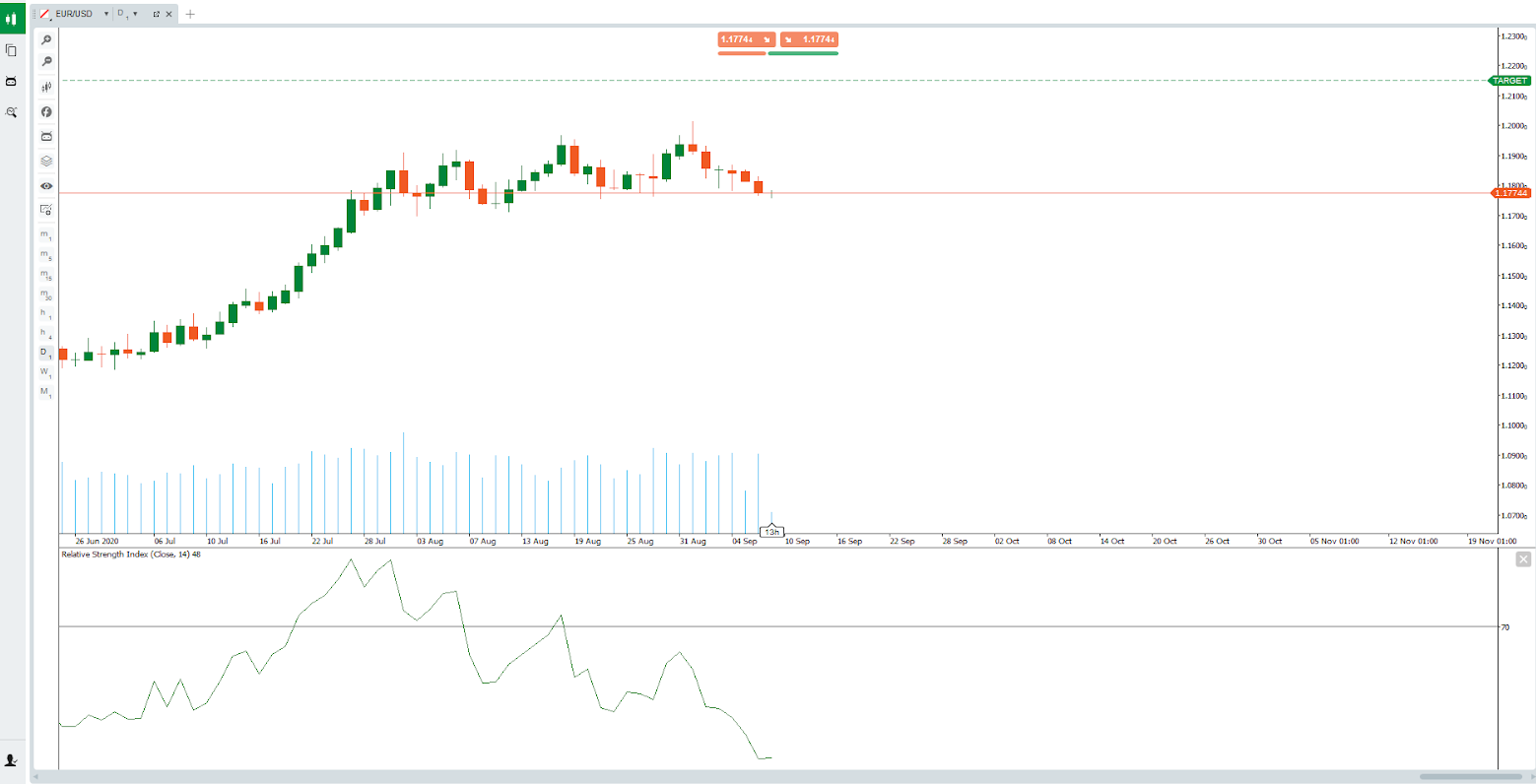 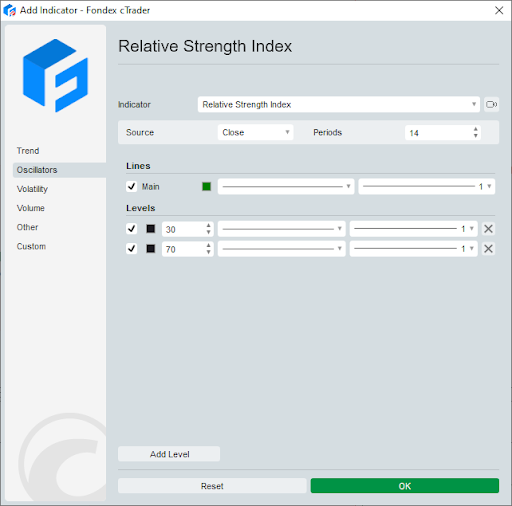 In this form you select the RSI Source and Periods, customize your line’s color thickness and type, set the overbought and oversold levels, and press OK. The RSI indicator will be added to the bottom of your screen.

What Does Relative Strength Index Tell You?

As already mentioned above, Relative Strength Index is an indicator that displays the current market momentum and indicates if a market is in an overbought or in an oversold state. The typical values of an overbought market is >70 and for an oversold market <30. Traders monitor the RSI indicator to identify if the market is in a trending state and if a reversal or price correction is probable. Based on the value of the RSI, combined with other observations about the market state, successful trading strategies can be devised. We briefly present some of them below.

How to Trade with Relative Strength Index

There are several trading strategies that use the RSI as the basic indicator to obtain trading signals. In this article, we present four different strategies to trade the RSI indicator. These are a) RSI Divergence b) RSI Swing Rejections c) RSI 50 Level and d) RSI Trend Lines.

The chart below shows a typical RSI divergence. 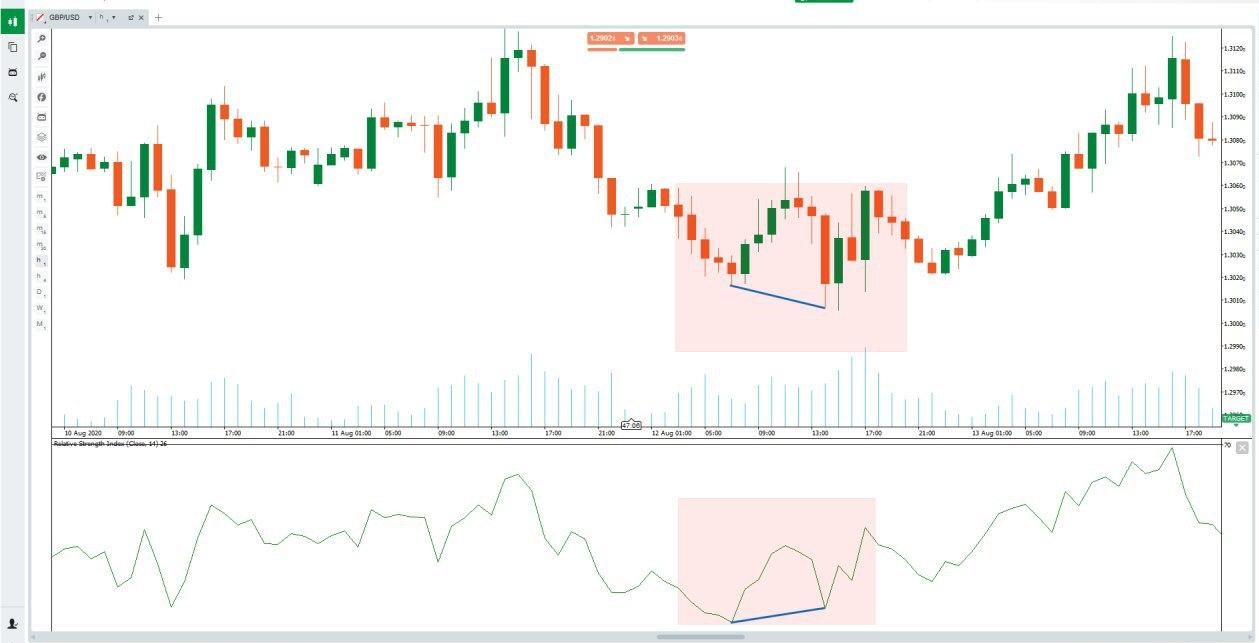 We can see that the price, while in a bearish trend, forms new lower lows (blue line and red rectangle inside the price chart). However, the RSI indicator is forming higher lows (blue line and red rectangle inside the indicator chart), diverging from the price trend. At this point it is evident that the bulls are gaining ground again, and that a trend reversal might be in the making. Indeed, the subsequent price action confirms this signal and the price starts trending upwards. You can use RSI divergence to spot reversal points, but your signal would also benefit by combining an RSI divergence with some more confirming information, such as a reversal price pattern (i.e: engulfings or trend line break outs).

Swing rejections are another popular RSI-based trading technique. A swing rejection is an advanced form of RSI divergence, and it is used to confirm a reversal and a formation of a new trend. The additional elements in a swing rejection are that a) the first high/low of the RSI needs to fall within an overbought/oversold territory b) the RSI level needs to break a fail point, formed by a previous high/low before a signal to enter a position is given. The Fondex cTrader chart below demonstrates an example of such a swing rejection. 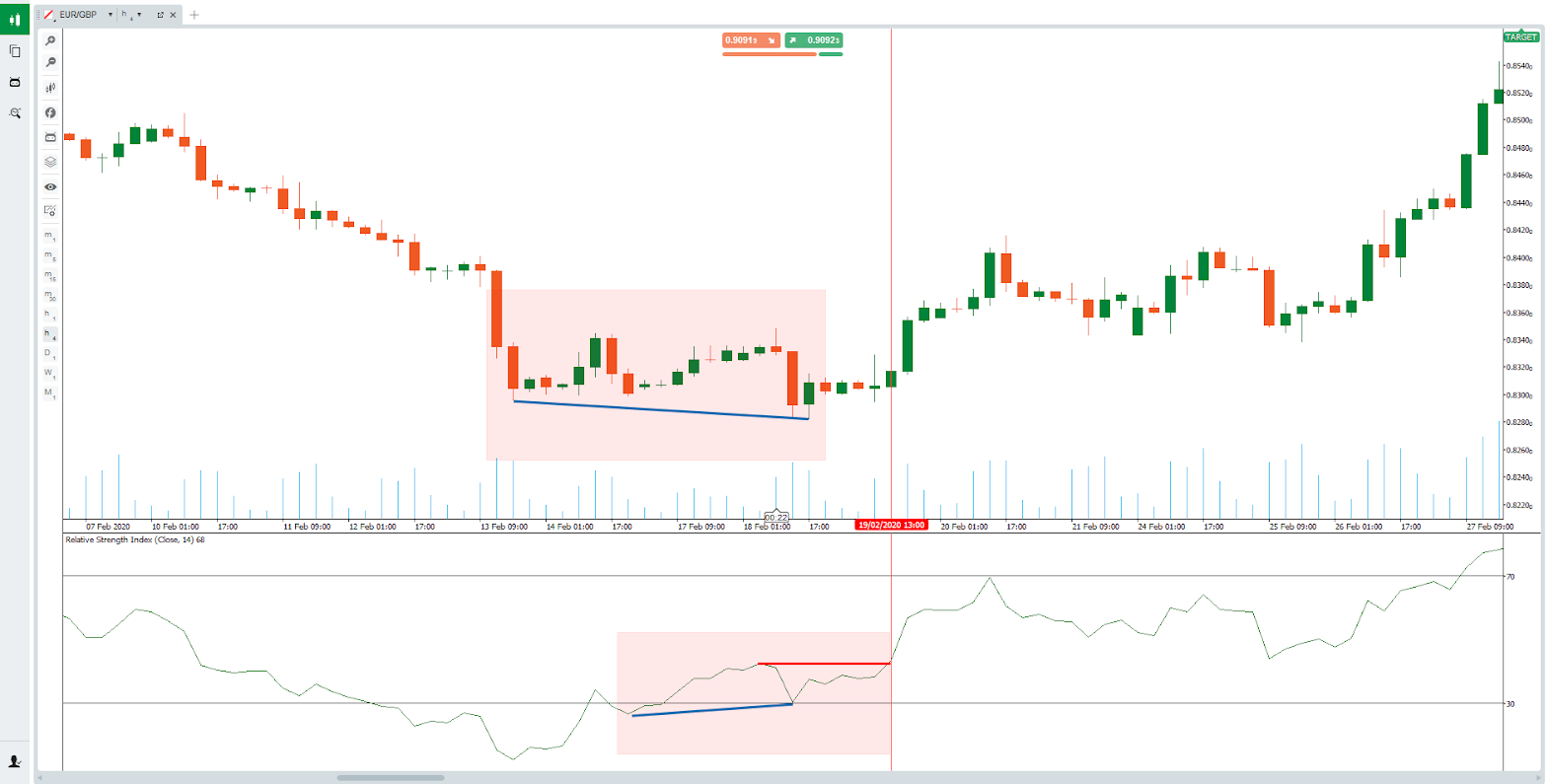 In the chart above we can see the blue lines and the red rectangles identifying an RSI divergence, as we did in the RSI divergence example above. We can notice how the RSI crosses above the oversold region, then retraces back, but before it enters the oversold area it swings again. At this moment we have a candidate setup for a swing rejection. As soon as the indicator value crosses above the last RSI high level, breaking the fail point, then the swing rejection is confirmed and a buy order should be sent. We can observe a price uptrend forming after the swing rejection, confirming the validity of the signal. However, as mentioned above for divergences, a swing rejection signal would be more reliable if combined with another confirmation signal, like a price pattern or the presence of a support/resistance level.

Alongside the 30 and 70 levels, many traders like adding an additional level to their RSI setup, level 50. RSI 50 level works as a trend confirmation point, which when crossed indicates the possible formation of a new trend. RSI 50 level works similarly to support and resistance lines and can be generated upon breaking through a buy/sell signal. The use of RSI 50 level can better be explained with the setup example below. 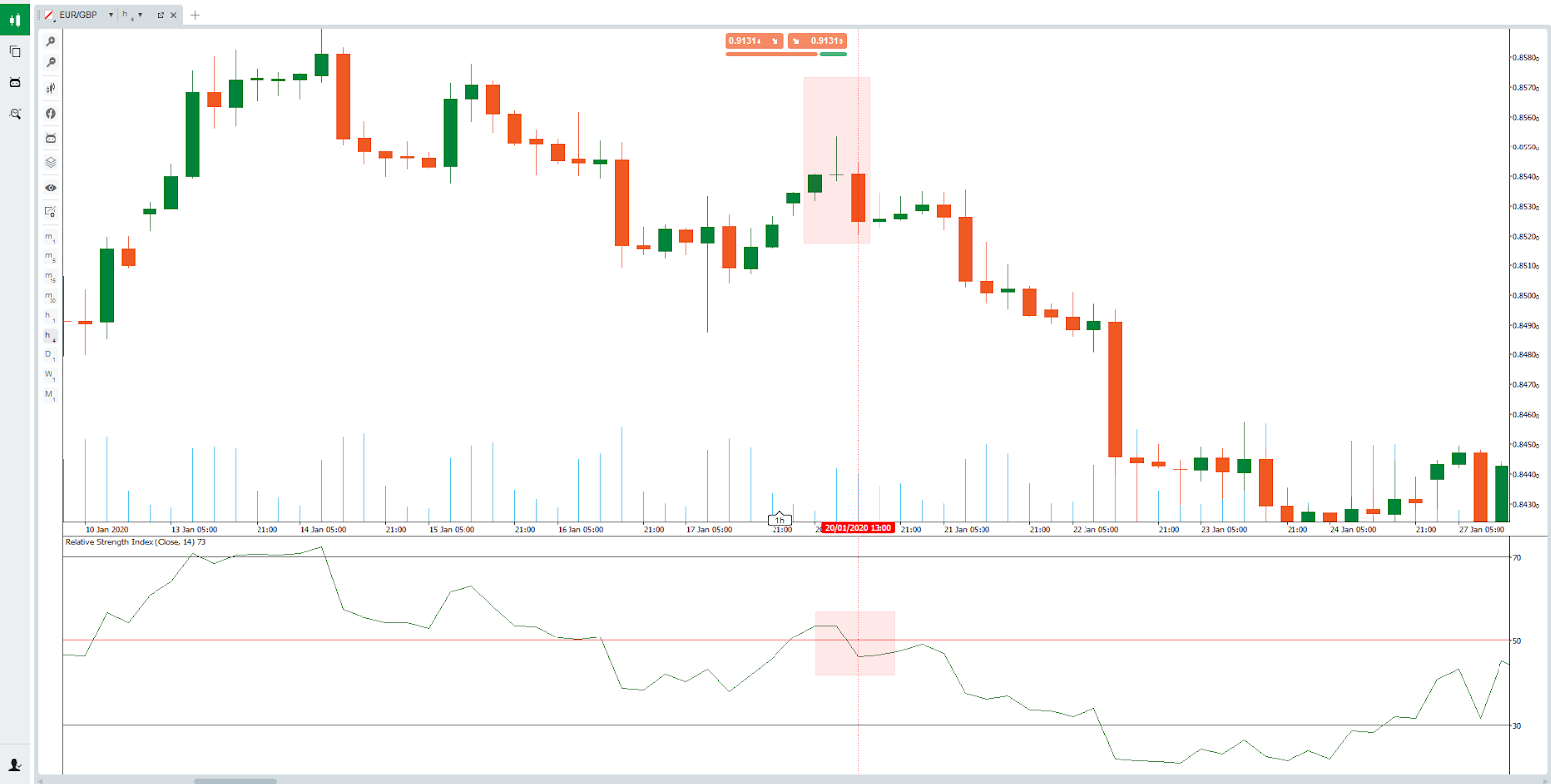 In the above example, we can see the EUR/GBP price after a brief reversal of a bearish trend, halting it’s bullish advance by forming a shooting star candlestick. The shooting star candlestick is then followed by a bearish engulfing pattern. Such a combination is usually considered a bearish signal. At this point, the RSI indicator comes into play as a confirmation indicator. On the chart, the RSI indicator, after briefly interrupting the bearish move down from an overbought level to move some points upwards, resumes the bearish course by crossing the 50 level at the moment the bearish engulfing is formed. The combination of signals, indicating that the bearish move is still strong and far from over. The price movement from this point onwards confirms the validity of this signal. 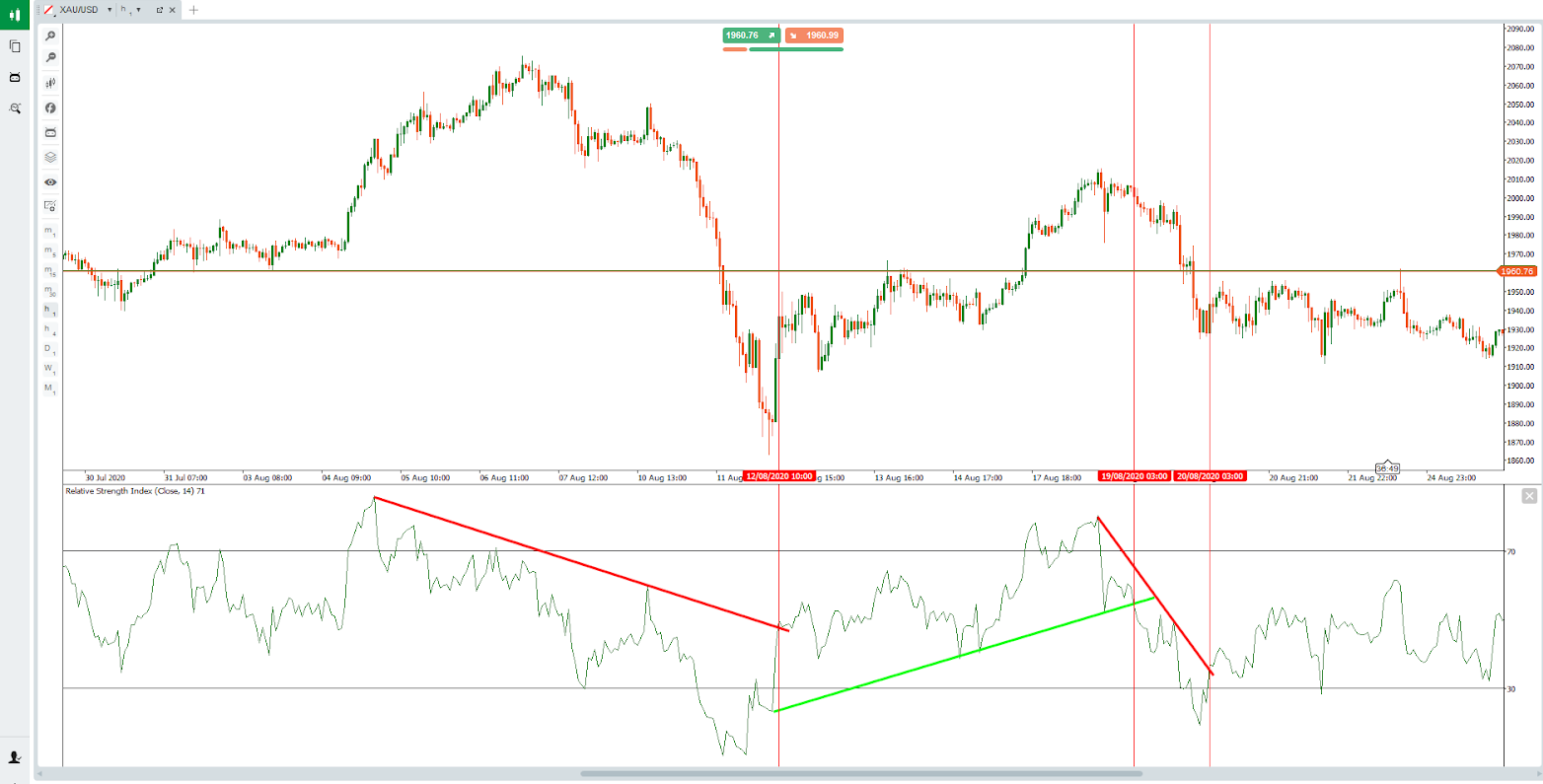 A break in the RSI trend is usually considered as a cue for a possible trend reversal. In the chart above, we can see how the two first trendline breaks lead to a trend reversal. However, we can observe that the last one was a face breakout. Therefore, RSI trend lines could be combined with other confirmatory information.

Limitations of the Relative Strength Index

Relative Strength Index, as any other technical indicator, always needs to be used in context. An out of context interpretation of the RSI patterns can generate a lot of false signals that could lead to substantial losses. Therefore, when using the RSI indicator, always consider the market fundamentals that currently move the market and combine the signals with other confirmation signals, like trend indicators, support/resistance levels and the relevant price action taking place on the chart.

*The products advertised are only available to clients under Fondex Limited Seychelles (SDL No: SD037).

It's all about the Fundamentals Vol. 2